It all began with this claim by Labor Member for Moreton Graham Perrett tweeting:

Perrett is a lawyer and a school teacher, so one assumes he understands what he says. The plain meaning of these words is that the Coalition (not LNP, it only exists in Queensland) has taken $80 bn from the states.

The graph below shows the Coalition has actually increased funding for health and education. It also shows this is at a slower rate than the Labor promise, but so what? That doesn’t justify the claim that there has been a cut, and the Labor promise was never real. 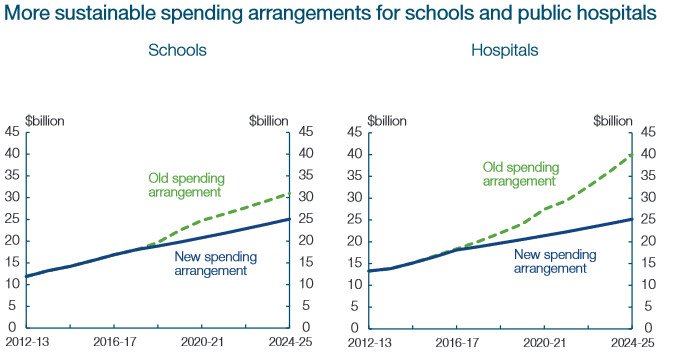 It’s a pea and thimble trick. Perrett wants you to concentrate on the money that the Rudd/Gillard governments promised they would spend on education and health outside the budget estimates.

The pea and thimble trick works by taking the pea out from under the cups, so that it doesn’t matter which cup you choose, there is no pea.

That’s what Perrett is doing.

The Coalition budget in 2014 ran for three years. The Labor budget before that did the same. There never was a budgeted allocation for health and education post 2017, and there certainly wasn’t any income to pay for it.

The promise was beyond the forward estimates, and given the likely change of government, no state government was taking the promise seriously.

It was a mirage, meant to wedge the Coalition after their likely election win.

The tactic is to promise something you would not be able to deliver, and then blame your successor for allegedly removing the promise, even when they are increasing funding, and even when the money for the promise was never there in the first place.

In running this infantile line Perrett, shows how badly served we are by the current political class.

He is a lawyer and a school teacher. He knows he is…well what word could I use but…”lying”?

Labor has to “cut the crap” and seriously engage on issues.

At the moment their cry is that any change that adversely affects any group is “unfair”.

But the real unfairness is that the youngest generations are going to be asked to fund unfunded, unbudgeted promises like the ones made on the death beds of the Gillard/Rudd governments.

But only if the Perretts of this world find themselves in government again, and are forced to honour their extravagant promises because the future has caught up with them.

And if they don’t themselves revert increases to reality.