Executive Director of the Australian Institute for Progress Graham Young said today that the ALP’s proposed new negative gearing regime would make Australia the second most expensive country in the OECD for capital gains tax.

The graph* below shows that Australia under a Bill Shorten government, with an effective tax rate of 34.88% on capital gains, would be less expensive than Denmark, but more expensive than every other OECD country.

“One of these fourteen is Australia’s close neighbour, New Zealand.” 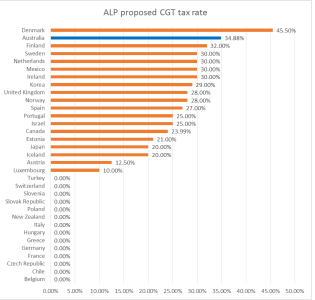 Mr Young said that at a time when international capital is more mobile than ever, and Australian international borrowings are around 60% of GDP it didn’t make any sense to make investment in Australia even more expensive.

“New Zealand is an increasingly popular destination for immigration from Australia. If the Labor proposal were ever to be implemented, as much or more capital might flow as well.

Mr Young said that Labor would probably protest that they have left the CGT level unchanged for new housing, but this ignores the fact that for investors to make their investment in new housing work, there has to be a secondary market in them.

“If the new capital gains regime interferes with the resale market, it will interfere with the market for new houses as well.”

Mr Young said there were good reasons why capital gains are taxed at lower levels than other forms of income.

“Part of the capital gain is an illusion created by inflation. It is unfair to tax an increase in value which is not real.

“But capital gains are the fruit of investment, and it is generally accepted that investment should be taxed at a lower rate than other forms of spending.

“Without investment an economy cannot grow.

“So while purporting to fix a housing problem, the ALP policy risks damaging growth in the economy by making investment less attractive than almost all OECD countries.”