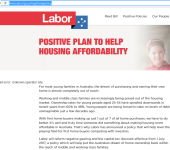 This morning Bill Shorten admitted on ABC Radio’s AM program that Labor’s negative gearing policy would not achieve its headline goal as a “Positive Plan to Help Housing Affordability”.

This exchange occurs in the transcript:

MICHAEL BRISSENDEN: Well housing affordability, as you keep pointing out, is one of the areas, one of the key targets of any changes for negative gearing. But that does suggest that you’d be quite happy to see house prices stall, at least, if not fall?

BILL SHORTEN: No, not at all. We know that our policies aren’t going to decrease housing prices.

MICHAEL BRISSENDEN: Well what does it mean if you talk about housing affordability?

In the waffle that follows Mr Shorten veers between suggesting that investors are unfairly competing with first home buyers, a clear indication that he expects prices to fall, to citing Saul Eslake, Jeff Kennett, and Joe Hockey as authority that they won’t fall.

He cannot have it both ways.

He also opened up questions on Labor’s modelling which make it imperative that Chris Bowen release that modelling now.

He has to explain why this is much lower than the tax increase predicted by modelling done by the Labor Party’s in-house think tank, the McKell Institute which puts the gain at $42Bn over that period and this modelling does not include the ALP’s doubling of the capital gains tax rates, so should be considered “conservative”, at least on the figures.

Shadow Treasurer Chris Bowen also has some explaining to do as yesterday he held the McKell Institute study up as a good one, compared to that by BIS Shrapnel, which the government had recently relied on as a basis for criticism.

We believe, on the basis of our analysis, that proper modelling will actually show that not only will the tax decrease house prices, but it will not raise significant amounts of taxation over the medium to long term.

Labor is in a muddle over negative gearing.