The Australian Institute for Progress launched its report into Australian attitudes to taxation today. The report can be downloaded by clicking here.

It is not good news for those who believe tax rates ought to be lower with more than 50% of respondents being prepared to pay more tax themselves – in some cases by an increase of more than 10%.

The study was based on responses from 1,568 members of our 13,000 strong online panel, which was then balanced to ensure it was politically representative. 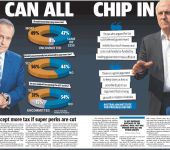 We received coverage in the Courier Mail with a double page spread on pages 4 and 5. Findings of the report included: