AIP Home > News > ‘Stick with the current mob for a while’

“Fake Tradie” has so far been the ad of the campaign. A bullseye for the coalition which bit not just by having the right lines, but by tweaking the tale of the social media beast which duly spat it out all over the place.

But if this is the best argument the coalition has to be returned – “we should just see it through and stick with the current mob for a while” – then their focus groups are telling them what ours is: this is an election almost without alternatives.

Voters are very unenthusiastic about the choice on offer.

Our research is qualitative, and respondents opt-in to the poll. That makes the raw figures unreliable for quantitative purposes, but not useless.

For example, you will generally find one party or another under-represented. Out of the majors this is generally the Liberal Party, with Labor as often as not being close to right, and the Greens having massive over-representation.

That tells you something about the enthusiasm of the partisans for their own side.

In our latest poll the Liberal under-representation was severe – 21% of the sample versus 27% for the ALP and 25% for the Greens. Back in December it was 27% Liberal, 20% ALP and 32% Greens. So while the latest Newspoll shows the coalition with a 51/49 percent lead over Labor its own supporters are not backing it heavily. Labor also suffers. While their participation rate has recovered between December and now, it is still at figures similar to the lows of the Rudd and Gillard years.

It also tells you that the early enthusiasm for Turnbull, with significant numbers of ALP and Greens voters prepared to give him a go, has disappeared.

My guess on our polling is that Tony Abbott would be doing just as well as Turnbull is at this stage if he had not been removed. Tony’s backers have stuck with Malcolm, but reluctantly so, and that is part of the reason for the lack of enthusiasm.

Which means that rather than pulling together a new coalition in the centre of politics combining moderate and left Liberal voters, together with moderate and right Labor and some Greens voters, with the hard right being forced to come along for the ride, as envisaged by Liberal pollster Mark Textor, Turnbull is having to rely on the old coalition.

That coalition consists of the left, centre and right of the Liberal Party along with the Nationals and a large bloc of working class Australians: people like the tradie in the ad. These working class Australians are most likely to come from outer-suburban areas, or provincial cities, and while they also vote Labor from time to time, they are also the core constituency for parties like One Nation and the Katter Party. They have been called “Howard’s battlers” and “Tony’s tradies” in the past.

The centre coalition would have been based on policy issues like climate change, gay marriage and refugees, with Turnbull perceived to be softer on those than his predecessor. But Turnbull was never going to be able to compromise – even if he was so-minded the party would not let him.

The old coalition is based on culture more than policies. So most of the participants have a “Team Australia” approach to nationhood and borders, but don’t necessarily agree on economic policy. They do believe balancing budgets is important but issues like free speech and individual responsibility are likely to motivate them most strongly. Some will be parochial and others cosmopolitan.

It’s a similar coalition to the one that won the Brexit vote in the UK.

On our sample Turnbull comes out ahead of Shorten as preferred leader, but he has a bigger disapproval rating for his performance. This is because not only has he lost the Greens and ALP voters who originally thought he looked good, but the voters on his right, who had nowhere else to go, disapprove of who he is, but will grit their teeth and vote for him.

So in a personal head to head, Turnbull wins.

To a certain extent Labor has played into the Liberals’ hands. They have run a presidential campaign, and they have tried to compete as an alternative government. At the same time they have been fighting to keep the Greens out on their left and have run a lot of Greens’ issues in this election like climate change and gay marriage. This works against them.

There are not enough first and second preference votes between them and the Greens to quite make up 50% +1 of the electorate. Like Turnbull they also need non-Greens minor party votes. They won’t get them when they take the other side of the culture wars.

Presumably the Medicare scare campaign is an attempt to appeal to the non-Greens minor party demographic – which tends to be older and less affluent than the population as a whole, but our polling shows it is very low down on their list of concerns, although these voters do have a general concern about health.

Indeed, there is an air of desperation around the ALP advertising at the moment. I even saw a Google ad spruiking their ability to “Safeguard your Superannuation”. Not only is this fishing for a constituency unlikely to vote for them, but yesterday they revealed they would bank the government’s savings from the superannuation changes, thus confirming their policy is no different.

This image, showing the distribution of concepts for the most important issue in this federal election, shows exactly where the various party supporters sit. For Labor and Greens it is climate change, along with education and health. For the Liberals it is the economy and debt, and the non-Greens minor party voters are down the Liberal end and attach to the arguments in the middle about tax and services, but through the gateway of gay marriage. 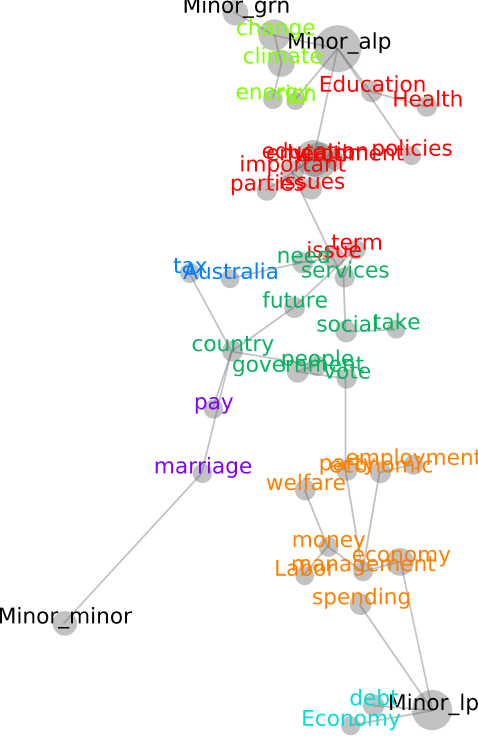 We also tested voters on their response to the campaigns that the three major parties were running on their websites. The table below shows again how the non-Greens minor party voters are much more closely aligned with the Liberals.

So it is unsure who will win in the House of Representatives, but neither of the two largest parties is likely to win in the Senate. Around 17% of our voters said they would vote differently in the Senate to the House, and more of these were Labor than Liberal.

Labor voters were likely to change to Greens, the others were most interested in the Australian Liberty Alliance and One Nation. The Nick Xenophon team did OK as well, as did the more established minor parties such as Family First and the Christian Democrats. (Xenophon is mostly a South Australian phenomenon, so while he is obviously doing well down there, he doesn’t figure strongly in a national poll).

Paradoxically the Liberals’ and Greens’ changes to the senate voting procedures might result in more minor party candidates winning rather than fewer.

As voters are apparently determined to take out insurance in the senate by spreading their vote around, a perception that it has been made more difficult for them to do this might result in them trying even harder to ensure their vote doesn’t flow to a major. So we may end up with a situation where a significant number of voters preference amongst minor parties and exhaust without getting to any of the majors. This is very speculative, and I’ll be looking at results to see whether there is any truth to it, but it would mean the purpose of the changes had been defeated.

So the takeout from the research is that a debate between two constituencies sharply divided on policy will be decided in the lower house by minor party voters who will empower one or the other, but who may very well take that power away in the upper house.

The question of union power does not appear on the map or in the table, although that was the basis for calling the election. In fact it only turns up when we ask about Bill Shorten specifically.

It is possible that, after having gone to all the trouble of having a double-dissolution to be able to pass two bills establishing an Australian Building and Construction Commission, a joint sitting will not provide the numbers that a Turnbull government needs to get them through.

No matter who wins the election, it is doubtful that they will have a particularly friendly senate. Looks like we could be in for at least another three years of stalemate, unless someone calls another double-dissolution election.