There are two ways to look at this budget – politically and economically.

Politically it is brilliant, redolent of the Menzies’ method of stealing your opponent’s clothes. It will be interesting to see whether it wins back the young family constituency, which along with older Australians, was the bedrock of Menzies’ ascendancy.

Economically it is a disaster, although it does deal with the debt situation, but at a cost. And there are some redeeming features, such as its moves on housing affordability.

The budget cements in higher taxing and spending, as the graph below (sourced from Michael Knox at Morgans) shows. And it demonstrates that the government’s default response to claims for higher spending is likely to be to accommodate them, and raise taxes to fund them.

We are on the escalator towards European rates of tax, and an Australia that looks more like the flabby one of the 70s, than the muscular competitor of the 90s. 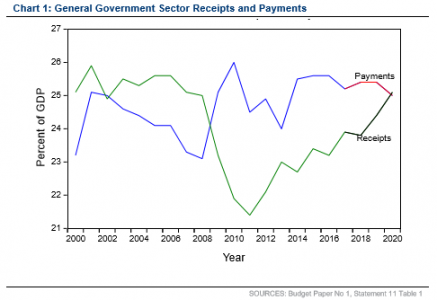 Tax rates are increasing and bracket creep will be a significant source of the improved debt situation. Part of the tax increase will also come from the 25% increase in the Medicare Levy. Australia will have some of the highest marginal tax rates in the world, and they will cut in at a lower threshold.

This is a far cry from the days when Peter Costello delivered a virtual flat tax of 30 cents in the dollar for the bullk of wage earners.

There is also a levy on foreign workers, and some reduction in negative gearing deductions.

Probably the most heinous is the tax on bank liabilities. There is nothing that I can see to distinguish this in principle from the Mining Super Profits Tax which Labor brought in and which was rightly criticised by the then Liberal Opposition.

It is basically kleptocracy – you identify an industry that is making good profits and which a significant segment of the populace doesn’t like, and you opportunistically slap it with a tax explaining that it makes enough money and won’t miss this little bit. You then take the appropriated profit to make a good fellow of yourself.

These measures are bad news for the economy and the average Australian, but not so bad for those who are internationally mobile and can work anywhere.

Not such bad news either for centre-right think tanks, like us, whose business is advocating for good policy. It seems that we’ll have plenty to do for the near term, no matter whether it is a Labor or Liberal National Party government.

I wish it weren’t so!

Finally I want to turn to housing affordability – a policy area where we have made a big contribution. (See here, and here and here for example.)

At least the government hasn’t followed Labor’s lead and won’t be rolling back negative gearing – apart from some tinkering around the edges with depreciation and travel – or capital gains. (In fact it is actually making taxation of capital gains 20% less onerous for investors in affordable housing).

It recognises the real problem for first home buyers is the deposit, and this won’t be cured by trying to drive investors out of the market (and thus making the rental market more expensive and the task of saving a deposit even harder).

But its solution is much more complex than it needs to be, and far less effective than it could be. Our proposal is to allow first home buyers to access money from their superannuation, in addition to their own savings.

This is simple and recognises that owning your own home is an essential part of retirement planning. It is also good investing as our yet to be published research shows that over the last 5 years, owner-occupied housing beat superannuation as an investment hands down (anywhere up to three hands down actually).

What the government has proposed is that in addition to normal superannuation payments, you can deposit an ear-marked additional $30,000, which attracts a 30% tax rebate on withdrawal, so it will be essentially tax free for lower wage earners.

The tax effective nature of it means that the government is subsidising the first home purchase.  Our alternative involves using only the purchaser’s own money.

And it will only marginally increase the savings rate. $30,000, even augmented by some of the state government deposit gap schemes, is not enough for a deposit. The saver will have to put aside significant additional monies, but there will be no tax incentive on this.

And we’d be happy to see them salary sacrifice more than their employer’s 9.5% into super, as long as the contribution to the house purchase was counted as a loan and repaid over time.

So the deposit could be saved more quickly, and over time the superannuation balance would be boosted as well, plus the purchaser would benefit from the significantly higher returns available from home ownership compared to superannuation.

In summary, Labor has won some significant policy debates, with the government capitulating. But it hasn’t won all of them. Malcolm Turnbull is fulfilling the promise that some saw in him to pull the Liberal Party back towards the “centre” (whatever that term really means), but at the same time I suspect this will fan the vote of One Nation and other minor parties.

It certainly leaves a lot of work for us to do in fields other than, but including, housing.