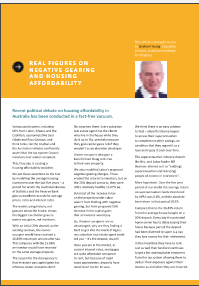 Recent political debate on housing affordability in Australia has been conducted in a fact-free vacuum.
Various participants, including MPs from Labor, Greens and the Coalition; economists like Saul Eslake and Ross Garnaut; and think tanks like the Grattan and the Australia Institutes confidently assert that the tax system favours investors over owner-occupiers.

This, they say, is causing a housing affordability problem.

We put these assertions to the test by modelling the average housing investment over the last 5 years – a period for which the Australian Bureau of Statistics and the Reserve Bank give us excellent records for average prices, rents and interest rates.

The model, using history, not guesses about the future, shows the biggest tax shelter goes to owner-occupiers, not investors.

The reason for the discrepancy is that investors pay capital gains tax whereas owner-occupiers don’t. No surprises there. Every suburban real estate agent has the clients who live in the house while they do it up to flip, precisely because they gain capital gains relief they wouldn’t as an absentee developer.

Owner-occupiers also gain a benefit from living rent-free in their own property.

We also modelled Labor’s proposed negative gearing changes. These eroded the returns to investors, but on the 20% deposit scenario, they were still a relatively healthy 11.67% pa.

But most of the increase in tax on the property under Labor wasn’t from fiddling with negative gearing, but their proposed 50% increase in the capital gains that an investor would pay.

So, if owner-occupiers are so advantaged, why are they finding it hard to get into the market? Again, any suburban real estate agent could tell you – it’s the deposit, stupid!

Once you are in the market, at current interest rates, mortgages are quite affordable compared to rent, but because of rapid asset appreciation, deposits have never been harder to save.

We think there is an easy solution to that – allow first home buyers to access their superannuation to complement other savings, on condition that they regard it as a loan and repay it back over time.

The superannuation industry doesn’t like this, and Labor leader Bill Shorten referred to it as “raid[ing] superannuation and starv[ing] people of income in retirement”.

More hyperbole. Over the 5 year period of our model the average return on superannuation funds monitored by APRA was 6.8%, and the absolute best return in that period 10.5%.

Compare that to the 26.83% return from the average house bought on a 20% deposit. Every day the potential home owner has to delay buying their house because part of the deposit had been diverted to super is a day they lose money for their retirement.

In the meantime they have to rent. Just as well their landlord continues to get a fair and equitable treatment from the tax system allowing them to deduct their expenses against their income as and when they are incurred.

This article was first published in REIA News.