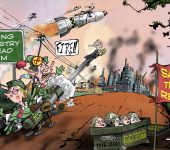 Queensland has some of the best developable mineral assets in the world. The value of mineral reserves depends on a variety of factors, of which price is only one. Access to markets, capital and running costs, and time delays in development are just as important as amount and grade of ore. But more important yet is a stable legal system which provides certainty to explorers and mine owners in developing what can be very long term projects (Mt Isa, was established in 1924, and is still producing).

The two latter acts were modified by the Newman government to make it more difficult for environmental activists, or others unconnected to a mining lease application, to object to the application. The objection right has been abused by various environmental groups and others, in Australia and overseas. They engaged in protracted legal actions which had no realistic prospect of success, but which slowed up project approvals. Time is money, and timing can also be everything. The ability of activists to delay can potentially threaten significant mining projects, to the cost of the entire community.

The current state government has reversed these changes. A future government cannot allow this to stand. While it is important there be proper appeal rights against decisions, these have to be limited to people directly affected by the decisions. How would landowners in a city feel if any town planning application they made could be contested by anyone in the state, not just their neighbours?

The “Chain of Responsibility” legislation strips directors, financiers, and others involved in mining of normal corporate protections against personal financial liability. The joint stock company is one of the great innovations of capitalism because it allows people to pool their resources to invest without each taking personal liability. It also allows directors to choose what level of liability they are prepared to accept.

Not only is there no reason to treat mining companies differently from other companies, but the change to the risk profile for people involved in these industries will make it harder to recruit good staff, or to finance projects. The risks that are being protected against are covered by bonds, insurance and other forms of security. It is wrong to make financiers and office-bearers personally liable.