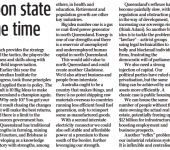 When it comes to sport, Queenslanders understand competition. 11 series SOS wins on the trot proves that.

But we don’t seem to have noticed that when it comes to the state of the nation, the Blues (and Victoria) are all over us.

Per person NSW has half our gross debt, just over a third our net debt, and is spending almost three times as much on infrastructure. Over the next three years the NSW economy is projected to grow 8.5%, with unemployment of 4.75-5%, and cumulative surpluses of $6.35bn.

How do we get into a winning position?

In sport it’s a coalition of the coach and the players. The coach provides the strategy and the tactics, the players the fitness and skills along with on-field improvisation.

Earlier this year our institute took those principles and applied them to policy – the result is 10 Big Ideas to make Queensland a champion again.

Why only ten? You get your best result chasing the changes that will make the best returns, and there is a limit to the resources government has.

Queensland has traditional strengths in farming, mining and tourism, and Brisbane is developing as a knowledge factory with particular strengths, amongst others, in health and education. Retirement and population growth are other key industries.

Big idea number one is a gas or coal-fired power generator for North Queensland. Energy is one of our strengths and there is a reservoir of un- and under-employed human capital in North Queensland.

This would add value to North Qld and could create another Gladstone.

Australia ought to be a country that makes things, and there is no point shipping raw materials overseas to countries running less efficient fossil fuel generation, only to reimport some as manufactured goods.

With a second interstate electricity connector we could also sell stable and affordable power at a premium to those south of the border, further leveraging our strength.

Queensland’s reflexes have become painfully slow, with regulation and obstruction put in the way of development, increasing our sovereign risk (think Adani). So another big idea is to tackle the problem of “lawfare” – environmental and activist groups using legal technicalities to bully and blackmail individual firms, frustrating the democratic will of parliament.

We also need a strong injection of capital. Our political parties have ruled out privatisation, but the same thing can be achieved by using assets more efficiently. A classic case is public housing.

We can house the same number of people without the state owning the actual real estate, potentially freeing up $12bn to build new infrastructure, boosting employment and business prospects.

Another “reflex” problem is our industrial relations system. It is inflexible and centralised in Canberra where dodgy deals are done between employers and unions. The state can use its own industrial relations laws to free the system up, and clean out the union sector by allowing competition in workplace representation. Union fees would be likely to drop as well.

Other ideas have to do with “player” welfare and training. Queensland is at the bottom of the pile for education. Money is not the answer. We should fund parents and students, and let them put the pressure on schools and teachers to produce the education they need.

A similar approach can bring major benefits to our hospitals, which are amongst the least productive in the country.

Morale is another problem. Times are tough and we all have to show restraint, so there is no place for any public servant earning more than the Prime Minister.

Citizens also rightly feel locked-out of the decision making process between elections. Citizen initiated referenda (similar to our recent plebiscite on 4 year terms and size of parliament) offer a solution.

Nutrition is another area of need. Queensland has closed fishing grounds to commercial and recreational fishers but we have no idea of the true extent of these closures, although we know that as a result Australia needs to import seafood.

And last there’s federation. Like a badly designed player draft, the Commonwealth Grants Commission takes GST revenue away from states that invest in mining projects, or drop tax rates so as to encourage business. This has to stop, and distributing GST transparently on a per capita basis is the only way forward.

They’re only ten ideas, but apply them to “team Queensland”, and you’d see a quick turnaround. Go the Maroons.

This article was first published by the Courier Mail.