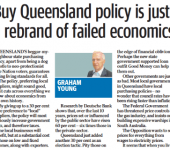 Queensland’s new beggar-my-neighbour state purchasing policy, apart from being a dog whistle to neo-protectionist One Nation voters, guarantees falling living standards for all of us.

The policy, preferring local suppliers, might sound intuitively good, but it cuts across everything we know about economics from our own history.

By giving up to a 30% price preference to “local” suppliers the policy will most obviously increase government costs, and therefore taxes. Some local businesses will benefit, but at a substantial cost to those on low and fixed incomes, along with exporters.

Recent research by Deutsche Bank shows that over the last 10 years prices set or influenced by the public sector have risen 60 per cent – 6 times those for private-sector goods and services.

Queensland just added another 30% as an election bribe. Pity those on the edge of financial oblivion. Perhaps the new state government supported payday lenders can help them out.

Other governments are just as bad.

Most local governments in Queensland have local purchasing policies – no wonder that Council rates have been rising faster than inflation.

The federal government has recently threatened price controls in the gas industry, and insists on building expensive warships in South Australia which is only marginally better than the federal opposition – it wants to set prices for everything from wages to electricity prices.

It seems that when you live in one of the most successful economies in the world it is easy to take it for granted and be tempted by “new” ways of getting ahead.

Except that the new ways are really the bad old ways that had to be abandoned in the 80s and 90s to ensure our economic survival.

After World War II Australia had a boom based on reconstruction, population growth and world-wide technological innovation. There was also high demand for rural commodities like wool.

It didn’t matter much that we had increasingly high trade barriers, an inflexible labour system and currency and interest rate controls – lots of our competitors did too.

But then the drivers of increasing affluence broke down and by the 70s we contracted stagflation, an hitherto unknown economic disease, featuring high inflation coupled with low growth.

The infection arose from increasing wages without increasing productivity, borrowing without hope of repaying, and then being bushwhacked by the OPEC oil price shock. Sound familiar?

Then the tax revolt and the micro-economic reform revolution led first by Margaret Thatcher and then by Ronald Reagan revolutionised and modernised the world.

“Steering not rowing” became the catchcry with government removing itself as much as possible from physically delivering services, and determining prices or wages.

Governments cut waste and tried to only invest in projects that would make a positive return.

This period lasted until the fall of the Howard government and the results were world-best practice. Despite a recession early on, and the Asian economic crisis, annual per capita GDP in the 90s was 2.2%, equal second highest for the century.

It was these reforms that allowed us to weather the GFC, not the “go hard go households” spendathon that sprayed national wealth up against the wall, for negative return, and then only after we had moved beyond the crisis.

The dollar depreciated, acting as a shock absorber; flexible wage arrangements meant that workers could be retained part-time rather than laid off; and an outward-looking flexible economy rapidly found new markets in China.

And then we stopped either steering or rowing and began thinking about redistributing instead. We’ve become timid. Scared we can’t compete. Envious of others for having more than we do, and no longer confident we can grow the pie.

The lesson of the quarter century from 1982 to 2007 is that governments need to trust their citizens to run their own lives, and citizens need to look to themselves first to get things done.

This state and this country need to cut debt and start investing again. We need to do more with less.

Yet we have a government increasingly regulating and taxing the economy and running up debt, and an opposition which appears only sporadically interested in calling them to account.

They both should know better, or perhaps they have forgotten. 10 years is long enough to rest on our laurels. Time to do some real work rather than pea and thimble shows.