Premier Annastacia Palaszczuk’s State of the State speech is misleading, and at times completely wrong, on electricity issues. Queensland’s debate on power needs to proceed on an honest basis. Affordable electricity is the key to running a competitive and prosperous state.

“It is unfair that the decision of other states to privatise electricity assets is hurting Queensland power prices, even as the Federal Government seeks to intervene in those privatised assets.”

This is wrong as the graph shows. 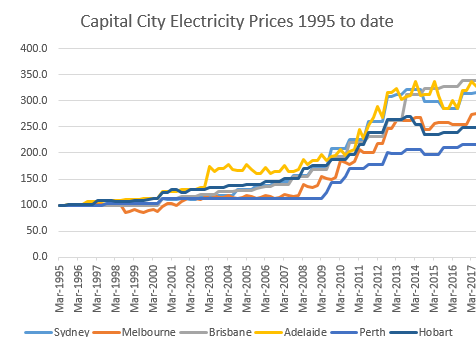 Victoria privatised its power assets after Jeff Kennett was elected in 1995. Yet Melbourne prices have increased significantly less than Brisbane where generation and distribution are predominantly state-owned. Brisbane has experienced the greatest increase in electricity prices of any capital city over this time.

“It is unfair that Queenslanders are paying more for electricity because other States are failing to develop their gas basins.”

Queensland shouldn’t be using gas to any significant degree because it has more than enough baseload coal-fired power. The major reason gas is used is to fill in the gaps when renewable energy (which is unavailable at periods of peak demand 95% of the time) cannot provide power.

“Queensland is already Australia’s energy powerhouse – we have Australia’s youngest and most efficient fleet of coal-fired generators, publicly-owned assets that on a daily basis are sending vast amounts of electricity into the National Energy Market.”

Queensland’s connection to New South Wales is 1200 megawatts. Queensland has around 11000 megawatts of power generation capacity in toto. 11% of our total generation is not “vast amounts of electricity.” We should consider at least doubling the interconnector capacity.

“We have a $5 billion pipeline of private investment in projects that will support 3,200 jobs and generate 5,000 megawatts of clean energy.

That 5,000 megawatts is more than twice the theoretical capacity of the ageing and much debated Liddell power station…”

The comparison is misleading. These projects are largely solar which have capacity utilisation of at best around 19%. That is equal to Liddell’s 2,000 megawatts running at 50% capacity, which has a capital price tag on it of only $1.05 billion to keep it running until 2032. In addition it will receive no cross-subsidies, compared to the renewables which will be eligible for LGCs worth around $85 per KWh  – more than the price of electricity which is approximately $76 per KWh.

The economics of these installations would be quite different without government renewables-only subsidies, and if they had to pay for the increased network costs and system costs due to loss of overall efficiency in the system. To some extent these companies are making private profits by socialising their expenses across all electricity users.

“Facts, rather than ideology, have to drive decisions in electricity investment and generation, otherwise the most vulnerable consumers, businesses, and their employees and customers, will suffer.

“Australian power prices used to be amongst the cheapest in the world. Now they are roughly twice what is paid in the USA. This puts all of us at a grave international disadvantage.”