“Renewables are cheaper” is the latest three word slogan to slink into political discourse.

And if they’re “cheaper”, the argument goes, then the cure for high electricity prices is more renewables.

But renewables are in fact more expensive, and if you want to cure high prices, the last thing you would do is dose up on the problem.

The cheapness claim is based on pricing sleight-of-hand: the boosters give you the price of the product, minus all the things you need to make it work.

Not that renewables don’t have their place, but when they are added to our electricity network they are the primary culprit for high prices.

Around the world there is a statistically significant relationship between the penetration of renewables and the price of electricity. 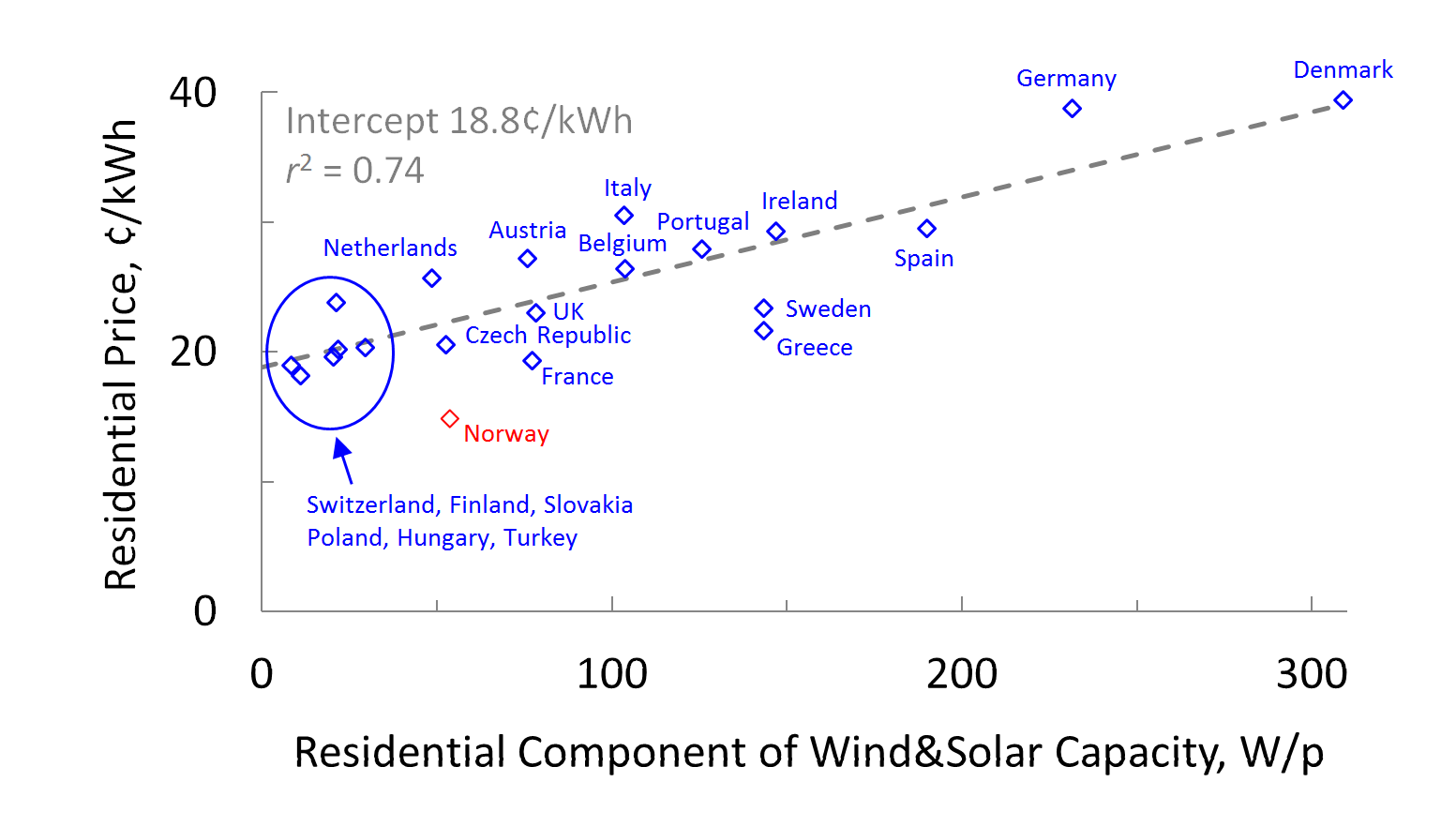 In fact, renewable generators are so expensive taxpayers have to pay them a bribe, called a “large-scale generation certificate” (LGC)

An LGC represents a megawatt hour of renewable energy production and in August the spot price was around $85 per MWh. Problem is that the spot price of a MWh of electricity is $79, six dollars less.

So the renewable energy generator gets paid more, just for turning-up, than a conventional generator receives for pumping out power all day.

Then there is their unreliability. Wind and solar only work when it is windy and sunny, and this rarely happens at periods of peak demand, and doesn’t happen all day long.

According to AEMO, while 17,000 MW of renewable generation capacity will be added to the system in the next ten years, only 5% of this will actually be available at periods of peak demand: that is, when it is needed.

And the utilisation of renewable energy plants is well down on coal and gas-fired plants. Thermal power plants have a capacity factor of 85-93%, while solar PV is 13-19% and wind power 20-40%.

Once you take their capacity factors into account the coal-fired station will use its equity 3.7 times more efficiently, making the solar farm much more capital-intensive, outweighing the fact that sunshine is free and coal is not.

But it gets worse. Studies show that for every megawatt of installed renewable generation, you need a megawatt of backup dispatchable.

That’s like having one serviceable comfortable sedan sitting in the garage and being forced to buy a trishaw, for equal cost, but having to use a driver who only turns up sporadically, when it suits them.

Being forced to pay two for the price of one is a bit of accessorisation they don’t tell you about.

And it gets worse. Your trishaw requires extra work done on the roads, and they load that into your invoice as well.

Much of the increase in the cost of electricity has come from “gold plating” the network – the electron highway. An increasing amount of that “gold plating” will be to make the system two-way, or to build high voltage networks to previously inaccessible places where wind and solar farms are frequently located.

Storage devices like batteries are no alternative to standby power and increase costs phenomenally.

Take Elon Musk’s 129 MWh lifeline to South Australia. At its full retail price of $200m it could fill-in for a 129MW solar farm worth $193.5m for only one hour with nothing left for the other 23.

That gives it a capital cost of around 5 times the generator it is backing-up. Over time the battery will degrade – just like the one in your phone or your laptop – so it will have to be replaced long before the generator, costing even more.

Proponents argue technology will bring costs down. It will bring direct costs down, and for coal and gas as well. But it will only cure part of the problem and be incremental (unlike computing power).

Unless someone finds a way to repeal the second law of thermodynamics we’ve probably seen most of the big improvements in solar, and definitely wind, generation.

In 2010, Kevin Rudd commissioned the Garnaut Climate Change Review. Garnaut predicted that by now electricity prices would have at least doubled if we decarbonised the economy. He was honest.

Time for his successors in politics to be honest too. Renewables are expensive.