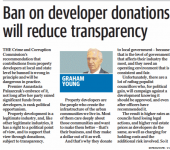 The CCC’s recommendation that property developer contributions at local and state level be banned is wrong in principle and will be dangerous in practice.

The premier’s embrace of it, not long after her party raised significant funds from developers, is rank political opportunism.

Property development is a legitimate industry, and like other legitimate industries it has a right to a political point of view and to support that view through its bank accounts, subject to appropriate transparency.

Property developers are the people who create the infrastructure of the urban communities that we live in. Most of them care deeply about those communities and want to make them better – that’s their business, and they make a dollar out of it as well.

And that’s why they donate to local government, because that is the level of government that affects their industry the most, and they need an environment which is consistent and fair.

Unfortunately there are a lot of ratbag populist councillors who for political gain will campaign against a development knowing it should be approved, and even after officers have recommended it.

The result is higher rates, as councils fund losing legal actions; and higher real estate prices, as developers do the same, as well as charging for holding costs, and the additional risk involved.

So it is in the developers’ interests, and ours, to get level-headed councillors into power.

Unfortunately the CCC doesn’t see it this way. In the first place they believe that elections ought to be “equal”.

They worry that someone who is an incumbent gets an advantage over someone who is a challenger and that people who are better-known are also advantaged. Apparently this isn’t fair, and demands government interference.

They want elections to be run as handicaps.

This leads them to suggest that challengers ought to be able to spend more money than incumbents and there should be caps on spending.

Developers, as donors, contribute to this inequality, so that is strike one.

Strike two is that there is a “perception” that developer donations are corrupt.

There is no evidence of this in their report – although some may come later as investigations are still ongoing.

But this raises a couple of issues.

In the report they recommend charges against a GCC candidate for contributions from the CFMEU.

There is no suggestion in the report that unions, even ones with as many convictions as the CFMEU, should be barred from donating.

Beyond their report, the only other people at a local government level currently charged with corruption are an earth mover, a solicitor, a barrister and a former city council CEO – all with respect to Ipswich.

There is no suggestion that earthmovers, CEOs or lawyers should be barred from donating.

It is a fundamental principal of our law that no one can be held responsible for what another does, unless there is a conspiracy. And no one is alleging that every property developer in the state is involved in a conspiracy.

So the majority are penalised for the possible sins of the very few.

If the premier gets her way a property developer will be a political neuter, only able to vote, and unable to even solicit donations for her party’s state campaign.

When it comes to real corruption, it’s not declared in electoral returns, and it doesn’t get spent on election campaigns. It goes from brown paper bags into the pockets of the officers being bribed. So the CCC’s recommendations won’t affect real corruption.

What it will do is make developer support for councils less transparent and drive it underground. When legitimate activities are prohibited, they don’t disappear, they persist in a half-world and bring the law into disrepute.

The CCC has politicised its role by rushing into print on the eve of an election. Their naïve recommendations will become part of the arm-wrestle between the major parties. The premier believes in handicaps, but it’s not the incumbents she wants carrying top weight, it’s the LNP.