AIP Home > News > Environment > Our Reef is still Great, but the research isn’t 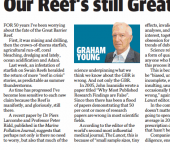 For 50 years I’ve been worrying about the fate of the Great Barrier Reef.

First it was mining and drilling, then the Crown of Thorns Starfish, agricultural run-off, coral bleaching, dredging and lately ocean acidification and Adani.

This week an infestation of starfish on Swain Reefs heralds the return of more “reef in crisis” stories, as predictable as summer thunderstorms.

As time has progressed I’ve become less sensitive to each new claim because the reef is manifestly, and gloriously, still there.

A new paper by Dr Piers Larcombe and Professor Peter Ridd, published in the Marine Pollution Journal  this month, suggests that perhaps not only is there no need to worry, but that much of the science underpinning what we think we know about the GBR is wrong.

And not only the GBR.

In 2005 John Ioannidis wrote a paper titled “Why Most Published Research Findings are False”. Since then there has been a flood of papers demonstrating that 50% or more of research papers are wrong in most scientific fields.

According to the editor of the world’s second most influential medical journal The Lancet this is because of “small sample sizes, tiny eﬀects, invalid exploratory analyses, and ﬂagrant conﬂicts of interest, together with an obsession for pursuing fashionable trends of dubious importance…”

Science relies on peer review as a form of quality control, but to anyone who has been involved in this process it has problems.

This is because peer review can be “biased, unjust, unaccountable, incomplete, easily ﬁxed, often insulting, usually ignorant, occasionally foolish, and frequently wrong,” again according to the Lancet editor.

In the commercial field this doesn’t matter so much. No one is going to spend $2.5B (the average in 2014) developing a new prescription drug based on science that hasn’t been put to the test.

Companies do their own due-diligence ensuring studies have been properly set-up, results are significant and can be replicated.

In some areas governments spend money ensuring that science is rigorous. How many billions were spent searching for gravity waves, quality assuring Einstein’s theory of relativity?

But in relation to what Larcombe and Ridd call “policy-science”, there is no process for quality control and assurance.

And this is a huge problem.

The Great Barrier Reef stretches over 2,300 kilometres of coastline.

It is exploited by fishermen and tourism operators, and potentially affected by coastal and hinterland development anywhere from Bundaberg to the tip of Cape York.

It is valuable in and of itself, and it has value to the people who make a living from it. Protecting one value can impact on the other, and the cost will be variously shared by all taxpayers as well as specific communities.

Ridd and Larcombe find that 9 of the most heavily cited (5,791 times) studies on the GBR are flawed.

Yet on the basis of them government has committed to spend $1B, and is being asked to commit another $8B, plus inflicting unquantified financial and emotional costs on communities and businesses.

They call on the government to establish an “Institute for Policy-Science Quality Control” to first examine existing studies, and audit future studies.

Will this achieve their aim? Even if it is an independent body, it will still be subject at some level to government oversight and control, and that introduces politics.

An alternative not in their paper is the idea of “red” and “blue” teams, a strategy imported from the military into commerce.

Military commanders in the US realised that plans were failing due to group think and confirmation bias. They came up with the idea of setting-up a “red team” which would try to pick holes in the “blue team” strategies.

The US EPA Administrator is considering using this technique with respect to climate science.

But none of these, or related concepts, are likely to work unless we find ways to institutionalise dissent in our universities and scientific organisations.

For an early- to mid-career researcher, disagreeing with a powerful established academic can end a career.

Even for a tenured professor like Ridd it is a risk. James Cook University is taking action against him for “misconduct” because of his criticism of the quality of GBR research.

Quality control in science is an institutional problem we desperately need to solve.

The scandal is we know it exists, have done nothing about it, and have spent billions of taxpayer dollars, in ignorance, or deliberately not caring.

That has to stop. We face too many real problems to waste time solving imaginary ones.