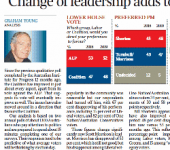 Since the previous qualitative poll completed by the Australian Institute for Progress 12 months ago, the Coalition has improved in just about every ­aspect, apart from its vote against the ALP. That suggests its vote will eventually improve as well. The issues have also moved around in a direction that favours the Coalition.

Our analysis is based on two annual polls of about 1300 Australians who pay attention to politics and are prepared to spend about 15 minutes completing one of our surveys. Their responses tend to be predictive of what average voters will be thinking by election day.

A year ago, Malcolm Turnbull’s popularity in the community was reasonable but our respondents had turned off him, with 67 per cent disapproving of his performance, including 35 per cent of Liberal voters, and 82 per cent of One Nation/Australian Conservatives voters.Those figures change significantly now Scott Morrison is leader. Morrison has disapproval of 53 per cent, which is still not good, but his disapproval among Liberal voters is only 5 per cent and among One Nation/Australian Conservatives voters 24 per cent, improvements of 30 and 58 percentage points respectively.

Bill Shorten’s approval figures have also improved over the ­period: 48 per cent disapprove of him now versus 53 per cent 12 months ago. This reflects a six-­percentage-point improvement among Labor voters, 16 among Greens, and 15 among “other” category voters. 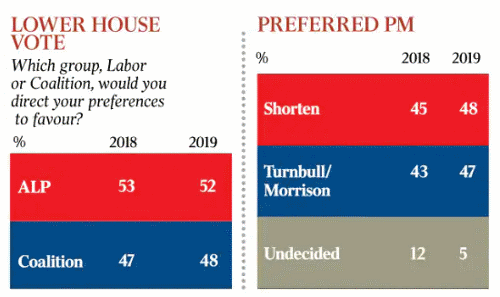 Tables courtesy of The Australian

In the end, it makes little difference to preferred prime minister. Twelve months ago, our panel favoured Shorten over Turnbull by 45-43 per cent. Today he shades Morrison 48-47 per cent.

The difference between Turnbull and Morrison is that all sides of the new Prime Minister’s own party, and most of the conser­vative independents, are prepared to accept him.

That is important in electoral terms as it should mean human and financial resources will be easier to marshall. Under Turnbull, resources had dried up, a major reason for his ouster.

Morrison is also viewed differently. Turnbull was seen as urbane but vacillating and weak, and an opportunist who had chosen the wrong party. Morrison may rush to judgment a little prematurely, but at least he makes decisions. He’s an opportunist who had the good judgment to be in the right party. He’s a marketer who can find the right phrase and who homes in on Labor’s weakness. And, somewhat paradoxically, he’s a Christian, and that makes him trustworthy in some eyes, as well as all of the above.

Shorten’s position has improved over the year. People still don’t trust him, but they respect him – that’s a similar view to what they had of John Howard as prime minister. And as with Howard, people have known Shorten long enough to become blind to the things they don’t like. Greens and the ALP Left would prefer someone else, but this close to the election, they have reconciled.

Shorten has developed policy, and argued it for three years, and he’s unified the Labor team. He might not be sincere, but he’s dogged and organised. Elections are decided on issues as much as leaders. And here Labor seems to have lost its momentum.

Twelve months ago, Labor’s Robin Hood pitch was front and centre on voters’ minds. Now some electors have realised they are the “rich” but they have only modest incomes. Climate change is still working in its favour, but it is not a factor that converts voters.

On the Liberal-Nationals side, debt and deficits have receded as issues.

All this reflects the national conversation. It’s summer so there are floods, droughts and bushfires, which leads to climate change. Kerryn Phelps’s medivac amendments draw attention to immigration, which links to illegal immigrants, infrastructure and urban congestion. Electricity costs, blackouts and the remarkable expansion of intermittent generation direct the conversation to electricity, which also invokes concerns about the cost of living, and deindustrialisation.

Tim Wilson’s parliamentary inquiry into Labor’s proposal to abolish cash refunds for excess franking credits has started conversations about retirement policy, drawing attention to Labor tax policies that hurt older Aus­tralians. The Coalition is in front on most of those issues

What does the data suggest the parties should do between now and the election? Labor needs to get back on to its Fair Go agenda and Coalition cuts to health and education. It has the youth vote, largely on grounds of identity politics and climate change, so it doesn’t need to belabour them and lose voters to the Right. It needs projects that reach out to older Australians. The fin­ancial services royal commission and the aged-care royal commission provide opportunities.

It also needs to undermine Morrison’s reputation of being honest, and competent, and it needs to keep harping on about Coalition ”chaos”. Even among Coalition voters, there is a feeling it might do their side some good to be in opposition.

The Coalition needs to keep the conversation where it is. Even when Labor has a win, such as medivac, it has a loss, because it reminds people of the chaos under Labor on immigration. Labor retirement taxes on houses and shares are making people nervous about the future. They need to engage more fully on renewable energy, and its costs, and they could address the level of immigration. They can accentuate negative perceptions of Shorten, drawing attention to his record as a union leader and his role in ALP coups.

They also need to reach out to a younger cohort. Perhaps painting the Labor’s tax on retirees as a tax on inheritance would be one path. Housing affordability is an issue for the young, and many are planning to do it in joint venture with the Bank of Mum and Dad.

Shorten has been acting like the prime minister since just after the last election and it is his to lose. This will be the most fascinating election since the 1993 Fightback! poll.

This article was first published in The Australian.