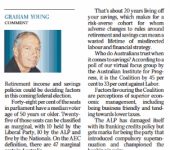 Retirement income and savings policies could be deciding factors in this coming federal election.

That is one of the conclusions of our latest What the people want, polling report. Download the report by clicking here.

Forty-eight per cent of the seats in parliament have a median voter age of 50 years or older. Twenty-five of those seats can be classified as marginal, with 10 held by the Liberal Party, 10 by the ALP and five by the Nationals. On the AEC definition, there are 47 marginal seats in Australia.

That’s about 20 years living off your savings, which makes for a risk-averse cohort for whom ­adverse changes to rules around retirement and savings can mean a wasted lifetime of misdirected ­labour and financial strategy.

Who do Australians trust when it comes to savings? According to a poll of our virtual focus group by the Australian Institute for Progress, it is the Coalition by 45 per cent to 33 per cent against Labor. 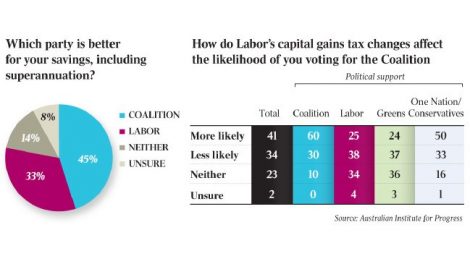 Factors favouring the Coalition are perceptions of superior economic management, including being business friendly and tending towards lower taxes.

The ALP has damaged itself with its franking credits policy but gets marks for being the party that introduced compulsory superannuation and championed the banking inquiry.

Fifty per cent of Australians ­expect to be comfortable in retirement. Only 25 per cent thought they would be uncomfortable.

Indeed, many of our respondents were already retired and reported they either had enough savings, or that the pension was sufficient to their needs.

Others expressed concern they would have to modify their lifestyle or that factors beyond their control, such as low income, ill-health, or gender, were interfering with their ability to save.

The groups most worried about their retirement were One ­Nation/Australian Conservatives voters and minor party supporters.

Thirty-eight per cent of One Nation/Australian Conservatives voters expected to be comfortable, versus 32 who didn’t. Among minor parties the result was 38 per cent each. This will factor into preference allocation.

When we asked people about their preferred form of retirement savings, Australians put the family home above all else.

Seventy-four per cent nominated it as their first choice for ­retirement savings. It was followed by superannuation, then cash. Real estate, managed investments and shares were next. Last was owning a business.

That means policies that hurt real estate are likely to be more dangerous for Labor than those that touch superannuation.

Those policies are negative gearing and capital gains tax, which don’t impinge on owner-­occupied housing but do affect the housing market generally.

Labor is ahead of the Coalition on negative gearing but only just, by 40 per cent to 37 per cent.

Labor’s pitch for fairness works here. Negative gearing is seen as a sop to the rich, with the word “rort” appearing frequently.

It appears to be this emotional appeal, more than housing affordability, which is driving its support.

Arguments against abolishing negative gearing include it will penalise owners by lowering house prices, penalise renters by increasing rents and jeopardise the retirement savings of those who have chosen housing ahead of super as a savings vehicle.

When it comes to capital gains, the Coalition is ahead. Labor would increase the tax by 50 per cent, which means 75 per cent of an asset will be subject to capital gains tax. Forty-one per cent supported the Coalition versus 34 per cent Labor. The arguments against Labor’s proposal were concentrated on the effect it might have on the economy and savings, the thought the tax is already too high, and a belief Labor will squander the proceeds. Those who favoured increasing the tax saw capital gains as an unearned windfall for the wealthy, a blunder by John Howard, robbing the government of money needed elsewhere. For those who believe taxation needs to be increased, this is a relatively painless way of doing it.

Only a small minority of Australians own shares either directly or through self-managed superannuation, so the electoral impact of Labor’s franking credits changes is likely to be less. The Coalition received 42 per cent support on the issue to Labor’s 31 per cent.

If the Coalition is thinking about opposing the increase in super to 15 per cent it should think again. That was the only proposition that got majority support, with 53 per cent supporting and only 21 per cent opposing.

Chris Bowen hasn’t done Labor any favours with older Australians by telling them they are “perfectly entitled to vote against us” if they don’t like the policies.

It’s a cameo I wouldn’t be surprised to see repeated ad nauseam during the election, just like Paul Keating’s throwaway line in 1996 “Get a job”, and it will draw attention to opposition arrogance and back to retirement and savings, just as Keating brought it back to jobs and the state of the economy.

Most people make bad investors because they pay too much for certainty and are too risk averse – that’s what compulsory super is supposed to adjust for by giving ­investment to experts.

The same dynamic plays in politics. We favour the certainty of the status quo over the risk of change. This election, beware the risk-averse senior.