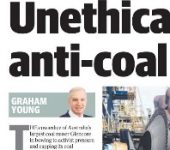 THE cowardice of Australia’s largest coal miner Glencore in bowing to activist pressure and capping its coal production torches the reputation of coal by implying coal mining is unethical.

This is grossly unfair to the industry and those who work in it, or use its products, which is all of us. The ethical case against coal is weak.

Multiple projections based on the Paris Accord predict that by 2040 we will still be burning about as much coal as we are now. Coal is part of the solution to a transition to new energy sources.

What activists have decided is that they know better and they will try to take energy decisions away from the sovereign governments of the world. This is a subversion of international norms, and the rule of law.

Activists are anti-democratic and in telling developing countries how to run their economies, neo-colonial.

Their actions will also cause more harm than the status quo, because they will actually increase emissions.

There is plenty of coal in the world, but ours causes the lowest emissions. Coal importers will simply shift to higher emissions sources, increasing greenhouse gases. If coal were abolished tomorrow that would also increase poverty and misery.

Coal makes up $67 billion of Australian export income and, in Queensland, contributes about $3.8 billion in royalties to state revenue. That’s a lot of jobs, and a heap of hospitals, schools and police stations.

Abandoning coal will devastate regional areas and state budgets, and again, for no tangible gain.

But coal is more deeply embedded in modern life than that. Electricity is the key to modern civilisation, and coal contributes about 40 per cent to its generation at the moment.

Even allowing for rapid growth in renewables, projections put coal at about 30 per cent of generation in 20 years’ time, and at a similar volume to now.

If activists put a clamp on coal worldwide then the outlook for poorer economies is catastrophic.

Power provides water and sanitation. Lack of clean water and sewerage are the greatest causes of mortality in the world.

Electricity also allows people to cook safely inside. If they don’t have electric power, they burn wood, or dung, which emit particulates, causing pollution and ultimately deaths from lung cancer and other respiratory diseases.

Richer societies have the resources to be able to afford to care.

CO2 also brings direct environmental benefits. Additional warmth allows more land to be cultivated and additional CO2 increases plant growth. This is a good thing with the world’s population currently 7.4 billion, and heading towards something like 11 billion by 2100. People need to be fed.

Indeed, the net cost of additional CO2 in the atmosphere is open to debate with recent calculations by newly minted Nobel Laureate, William Nordhaus, suggesting the cost is impossibly high.

Then there is the damage that activists potentially do by forcing wind and solar on us. These are ancillary technologies that can’t produce baseload at a reasonable cost. Apart from fossil fuels, the only fuel we know of that can is nuclear. But that has been ruled out.

Those who think it will are ethical impostors.