This brief analysis concentrates on the promise to increase electric vehicle sales to 50% of all vehicle sales by 2030 and fact checks claims made in the media on April 1, 2019. (To download a pdf version, click here.)

As subsequent Fact Bite will look at the consequences of a planned target of 50% of new cars being EVs in a national and international context, as well as electrification of the transport fleet.

On the evidence we can find 1 and 3 are definitely wrong, and 2 is implausible.

Not according to the International Energy Agency. Their report Global EV Outlook 2018 contains the following table. 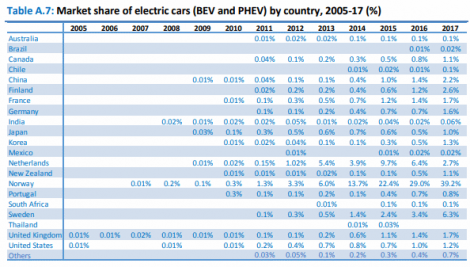 Out of OECD countries Australia is level-pegging with Chile, and ahead of Mexico. By restricting his remarks to OECD countries Mr Butler also skews the results with large economies like Brazil and India being well-behind behind Australia. 14 OECD countries are wrapped up in the figure for “Others” and it is impossible to know what the market share electric vehicles have in each of these but it is likely to be quite low in some.

2.      “[Australia] is the only OECD country that doesn’t have mandatory fuel efficiency standards…and the most fuel inefficient fleet in the OECD”

According to the International Council on Clean Transportation, only 9 governments “have established or proposed fuel economy or greenhouse gas emissions standards for passenger vehicles and light commercial vehicles/light trucks as of April 2018”. The first claim appears to be wrong.

Global Petrol Prices has assembled per capita daily gasoline consumption for a variety of countries. Their figures are shown in the graph below. Australia has a high per capita consumption figure, but it is below the USA and Canada, and above most countries, including New Zealand and Japan.

Fuel consumption is affected by distance travelled, and in Australia drivers routinely cover large distances. This is also true of countries like the USA, but not necessarily countries like New Zealand and Japan.

So we did calculations on each of these countries to determine the approximate value for daily per capita consumption by distance travelled.

The results of that for USA, Australia, New Zealand and Japan are shown below:

This analysis assumes that average number of occupants per car is similar between countries.

On this basis Australia’s vehicle fleet efficiency is comparable to our nearest neighbour, and better than both the USA and Japan. This despite the fact that the USA and Japan have emissions targets, and we don’t.

3.      “We want to get to 50% of new sales by 2030…which…reflects where every serious bit of analysis says the electric market around the world is going to be.”

We can find no basis for this. The IEA has two scenarios that it works to. One is business as usual, where sales in 2030 of new EVs are approximately 17%, and a more ambitious target called EV30@30, which is a campaign involving the governments of Canada, China, Finland, France, India, Japan, Mexico, The Netherlands, Norway, Sweden, and the United Kingdom, and a number of NGOs and businesses. The EV30@30 target is for 30% of light vehicle sales in 2030 to be electric vehicles.

So the most ambitious international target is for 30% of new car sales by 2030.

There are a number of analyses around of the potential for reaching either of these targets. This analysis from UC Davis suggests that even getting to a cumulative 100 million vehicles by 2030 (under the low end of the IEA scenarios) would be difficult, if not impossible.

Google as we might, we can find no support for this claim. There are some countries who have set similarly ambitious targets to the ALP (Norway is at 40% already, but car travel is low by developed world standards), and they are a very small exception. 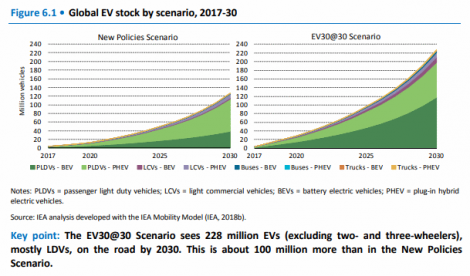