Bill Shorten claims that corporate profits are rising much faster than wages, claiming “39 per cent is the increase in corporate profits since you last voted for Malcolm Turnbull. Wages have moved 5 to 6 per cent.” Not only is this not true (the vagueness of the “5 to 6 per cent” gives this away, but it is an outrageous cherry-pick.

By arguing that corporate profits are too high Shorten is rejecting Labor’s history. The Hawke government’s Prices and Income Accord with the ACTU was based on increasing the share of the economy that went to corporations so that they could save and produce, thus lifting economic growth, employment and wages.

Shorten is opting for a populist pitch aimed at voters who do not understand how they have come to enjoy their current standard of living. Download our latest “Fact Bite” on the issue by clicking here. 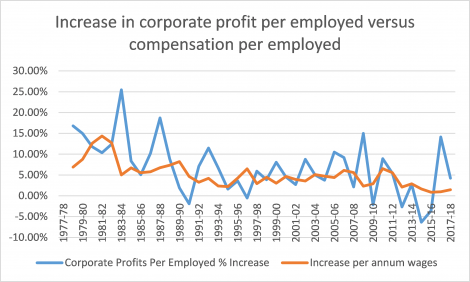