In 1998, the case of Israel Folau would have been front and centre in the elec 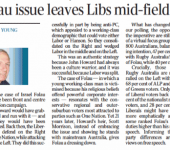 John Howard would have grabbed the ball and run with it – and Kim Beazley would have been wrong-footed. Back then, the Liberals had to defend on the Right against One Nation, while attacking Labor on the Left. They did this successfully in part by being anti-PC, which appealed to a working-class demographic that could vote either Labor or Hanson. So they consolidated on the Right and wedged Labor in the middle and on the Left.

This was an authentic strategy because John Howard had always been a culture warrior, and it was successful, because Labor was split.

The case of Folau – in which a young working-class man is victimised because his religious beliefs offend powerful corporate interests – resonates with the conservative regional and outer-suburban voters most attracted to parties such as One Nation. Yet 21 years later, Howard’s heir, Scott Morrison, instead of embracing the issue and showing he stands with mainstream Australia, gives Folau a dressing down.

What has changed? Based on our polling, the opportunity and the imperative are still there. Out of a virtual focus group of just over 800 Australians, balanced by voting intention, 47 per cent disagreed with Rugby Australia’s treatment of Folau, while 40 per cent agreed.

Crucially, those who back Rugby Australia are mostly corralled on the Left with support of 68 per cent of ALP and 72 per cent of Greens voters. Only 12 per cent of Liberal voters back them, 5 per cent of the nat­ionalist minor-party voters, and 28 per cent of others. Liberals might have been even more emphatically against, but some ranked Folau’s contractual duties higher than his right to free speech. Informing these inter-party differences are opposed views on free speech. The Right thinks you should be able to say what you want. If people are offended, that’s their problem.

On the Left, free speech means being able to speak in a meeting, but it doesn’t license anything other people find offensive. You are not free to express offensive views, which include homophobia, Islamophobia, racism or misogyny.

This then informs views on hate speech. There is support for anti-hate-speech laws across the board, with strong majorities on the Left, and some substantial min­orities on the Right. It doesn’t necessarily imply acceptance of section 18C of the Human Rights Act, because hate speech for its right-wing supporters has to include an incitement to violence. The free speech positions reflect recent victories in the culture wars. The gay marriage postal ballot result gives them a positivist justification for defining homophobia as outside of the bounds of free speech: homosexual relationships are now equal to heterosexual ones and therefore homo­sexual relations have been normalised.

So the Left has become the conservative force in Australian politics, and its version of free speech is a way of pulling up the drawbridge and closing the portcullis on the losers. This is reflected in views on whether we need more free speech protections in Australia. The Left tends to think we don’t, while the Right definitely think we do. As much as being a measure of whether speech ought to be free or not, it is a measure of whether your side is winning the war or not.

An interesting departure from the sharp divide was views on the need for religious freedom laws. Only 24 per cent supported them, while 39 per cent opposed.

Some thought religious freedom wasn’t under attack, others said religions were not free to make their own rules, and if the law recognised something as legal, then that was the ethical position.

So when Israel Folau comes along, it’s the Liberals who are wrong-footed, no longer sure they have the majority on board, unclear about what they think on free speech, and politely not wanting to upset gays and lesbians. It’s Labor that is more sure-footed, feeling it has momentum on its side and knowing what it believes.