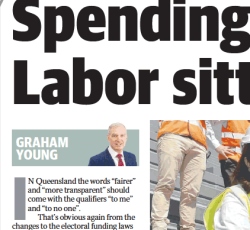 In Queensland the words “fairer” and “more transparent” come with qualifiers – “to me” and “to no one”. That’s obvious again from the changes to the electoral funding laws announced by Premier Annastacia Palaszczuk and Justice Minister Yvette D’Ath.

The amount that political parties spend will be capped, as will be the amounts individuals can donate. At the same time public funding will be doubled.

Sounds fair enough until you work out who benefits.

Instead of “tak[ing] money out of politics” it just changes the mix and moves more of the chips to Labor’s side of the table.

When caps on political spending are in place – parties work out how to get around them. One strategy is to find allegedly independent front groups and politics gets dirtier and murkier.

We’ve been here before.

The 2014 Redcliffe by-election was held under similar legislation. The ALP and the LNP spent exactly the same amount, which sounds fair, except that added to the ALP side of the campaign were another six unions and other organisations that all spent the same amount as the ALP.

Under this “fair” system, the LNP was outspent 7 to 1.

Labor’s counting on this happening again, and in the same proportions. Under the bill you can donate to a political party, as well as up-to 6 “third parties”.

This table lists the amounts raised by each party, and the size of the average donation made per donor in the 12 months between October 2018 and October 2019.

The LNP is well ahead of Labor in donors, as well as amount donated, yet the average LNP donor gave only half what the average ALP donor did. The next table explains how this happens.

If it wasn’t for the unions the ALP would be out of the game. That’s what happens when you take your eye off the ball, industry founders, unemployment is the highest in the country, and a drought is added to that. No one wants to donate to you and you are dependent on those who have a narrow vested business interest in keeping you in power.

Interestingly, while the justification for the changes is that there is too much big money telling our governments what to do mining doesn’t feature at all in the top 10. My “Energy” category does include some gas and coal, along with power generators and suppliers of renewable energy, but it is not even 10% of the total.

So here’s the fix. You cap the total amount that either side can spend at a figure somewhere around where your opponent might get to, knowing you’re going to fall short. You then change the public funding formula so that you’ll get there without any fundraising.

That leaves both of you with a surplus, and theirs is even larger than yours. The catch is that the only way you get to spend the surplus is by sending your erstwhile donors to contribute to third party campaigns.

The ALP proposal is that over a four year period you can only donate $4,000 to one party, and a further $4,000 to a maximum of 6 third parties (however a third party is defined). So that is less than the average donation over the last one year period. You can also donate to a candidate, but to a maximum of $6,000 over the same period.

In just the last 12 months both of the majors have raised more than they can spend.

This is great for the ALP, because they have 26 affiliated unions who can save the money they would have donated and spend $1 million of it each in the next state election. The LNP don’t have any third parties in this position.

And there is another advantage accruing to unions. We know from the Trade Union Royal Commission that a lot of union money actually comes from fees paid to them by companies for things like training, along with their union dues.

Presumably the legislation (which we have yet to see) won’t classify either of these as donations. So unions will effectively fall outside the cap on donations.

Unions aren’t the only third parties and Labor knows how to play the third party game really well. They’re already at it finding third parties to back their plans which they then present as proof this is what is needed.

One of these is the Centre for Public Integrity, to which Queensland’s Tony Fitzgerald has lent his name.

Since when did this government care what Fitzgerald thought? It didn’t stop them from changing the voting system to compulsory preferential, against his recommendations.

The Executive Director of this centre is Hannah Aulby. Aulby is a card-carrying member of the Green Left Industrial complex. Previous jobs include climate change campaigner with the Australian Conservation Foundation, and author of at least one paper for The Australia Institute.

She thinks democracy and consultation are fine, as long as it is for her side of the argument, once describing as “pernicious” a meeting between the Chairman of Adani and the Prime Minister, because businesses shouldn’t even be talking to government.

The rest of the organisation appears to consist of some retired judges most with Labor connections; two barristers, one of whom specialises in refugee matters, and the other who has just been condemned by a Labor member in the NSW parliament for endangering democray; and two academics, one of whom is a Labor lawyer who has unsuccessfully run for preselection twice.

This is not a group that you would go to for independent, fair-minded advice

Labor has form when it comes to fiddles. When the opposition with the cross-bench expanded the number of seats in the last parliament, they sneaked in compulsory preferential voting, because it favoured them.

Then they tried to nobble the LNP’s fundraising efforts by banning property developers from donating. The LNP has obviously regrouped from that, with private donors filling the gap to such an extent that when it comes to donations the LNP can claim to have a bigger grassroots following than any of the other parties.

So now we have this.

In the old days Labor used to rightly complain about the Joh Gerrymander. This does the same thing, but instead of misallocating geography and voters it misallocates money.

It’s amazing how the sniff of ministerial leather masks the stench of electoral deceit, especially when a government is in trouble. This bill is wrong, pity the government has the numbers to force it through.