Last night I was interviewed by TRT – Turkey’s answer to Al Jazeera – on a panel moderated by Adnan Azwaz on the Australian fires. My fellow panellists were Professor Mark Howden and Tony Kevin.

Azwaz did a good job, and his courteous approach to moderation could teach Tony Jones a thing or two, although he obviously had a point of view different from mine.

Howden is an IPCC lead author and Kevin, is well, Kevin, a former diplomat who hates anyone to the right of Sarah Hanson-Young and is a concoctor of conspiracy theories.

My position is that it doesn’t matter where you stand on climate change, there is nothing that Australia can singlehandedly do about it, and so you can’t blame Australian climate change policies for the bushfires. We emit 1.36% of global manmande CO2, which is dwarfed by the top three emitters – China, USA and India – which between them account for just under 50% of emissions.

China is increasing emissions at a rate which negates our whole output every 6 months.

So even if Australia shut-up shop and went back to the stone age, it would make no difference to the climate.

In which case adaptation is the only sensible strategy. You should only worry about those factors you can control.

It is here that the Australian governments need to concentrate their policies, but it is uniformly the responsibility of state governments, and nothing directly to do with Scott Morrison and the Commonwealth.

If Morrison has a role it is knocking the heads of state governments together because maladministration in one state can lead to conflagration over the border in the neighbouring state.

Our part of the program was more a pile-on on Australia for allegedly not playing its role in combatting climate change. This is a nonsense line as the graph below demonstrates – Australia is in the middle of the class, along with New Zealand and Canada, and is certainly no laggard.

Ironically 7th from bottom of the class is Turkey, the host of our broadcast. It increased emissions per capita over the 10 years to 2017 by 23%, while Australia decreased hers by 12% per capita.

I didn’t want to get into arguing the science as it’s a rabbit hole that few viewers would want to follow, but the effect of manmade climate change on bushfires would be negligible. The argument boils down to the hypothesis that an increase of 1°C over pre-industrial levels – say 35°C increased to 36° – is going to significantly affect fire ferocity.

But if temperature were the only determinant of bushfires then Saudi Arabia or Libya, being the hottest countries in the world, would also be the forest fire capitals.

Yhey aren’t because they don’t have a lot of bush to burn.

The most significant contributors to fire are first and foremost fuel, followed by oxygen and relative humidity/moisture.

The amount of oxygen available will be increased by wind.

I’ve seen nothing to suggest that global warming is responsible for an increase in that. If anything, the fact that the poles are expected to warm faster than the equator means that the energy differential between the poles and the equator will decrease so decreasing wind sheer on a global scale.

There could be a global warming signature in the amount of fuel available as Australia, despite the current drought, is in a very wet period (see the graph below sourced from the BOM). And CO2 fertilisation is also increasing growth rates. 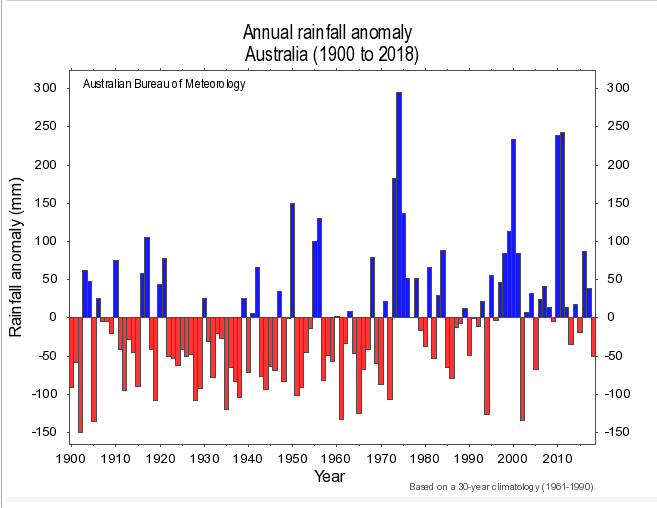 Whether the increase in rain is due to climate change is open to question. Rainfall tends to be driven by ocean circulation, which so far seems to be immune to the slight increase in ocean temperature.

With an increasing human population faster and more growth is a good thing – we need more rain to feed a growing population – but it does bring challenges in fire risk reduction.

This is amplified by Australia’s tendency to drought which dries the fuel once it has been grown.

However, despite the current drought, there are fewer dry years, so moisture and humidity are unlikely to be more than usually affected.

So what should governments do? Obviously they need to increase fire reduction burns. It is no excuse to say that the window for burning is too small, as the Queensland government has just argued.

If there has been a reduction in the window, then they either need to invest in more labour or more productivity (probably both). It’s not as though there aren’t a lot of unemployed people around in rural areas in most of these states who would presumably jump at the opportunity for some seasonal work.

We also need more research into Aboriginal fire management practices which produced quite a different landscape to what we have today. This will probably mean conceptualising differently what a national park is. In some parts of the country it could be 60,000 years since the landscape was really in a state of nature – do we really want to go back to that?

I managed to get most of this into the discussion, but I was taken aback by Tony Kevin, who viciously attacked the prime minister (apparently his religion gets in the way of him doing anything), the government (stacked with climate deniers), and even me (paid by the fossil-fuel industry  apparently, but the cheques must have gone astray). I was also ambushed by the Green to Brown Report which apparently rates Australia at the bottom for action on climate change. One of the authors of this report, Bill Hare, is an Australian, and his authorship was thrown at me as proving Australia’s poor performance.

It made me wonder what it is about Australians like Kevin and Hare that they will lie about their country and drag its reputation through the mud to make their ideological points. I also wonder what drives the World Bank to fund this dross.

As my graph above shows, Australia’s performance is above average. No amount of twisting of statistics can change that.

Injecting the false fact into the debate that we are underperforming, followed by the false syllogism that therefore bushfires are entirely the federal government’s fault, is to exploit the misfortune that has befallen many of our countrymen, and to inflame their grief and anger.

It is one of the most despicable of political tactics, and it has been indulged in by members of all political parties, including in the “guileless” photo-ops of the leader of the opposition feeding snags to fireys.

This is a time for malice to be put aside. The price for bad analysis and even worse “solutions” is property loss, and death.