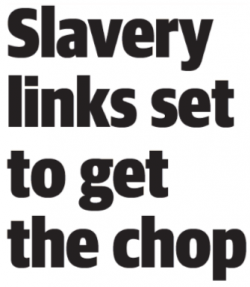 This letter was written in response to the claim in The Courier Mail  that Sir Thomas McIlwraith tried to annexe Papua New Guinea so as to “promote easy flow of slave labour”.

There are at least 2 ways of cancelling someone. One way is to remove their name from a place. Another, and more damaging, is to distort their reputation.

Activists are practicing both kinds with their claim  the McIlwraith Range ought to be renamed because Sir Thomas McIlwraith, after whom the range was named, tried to annexe Papua New Guinea in order to “promote easy flow of slave labour”.

McIlwraith was a 19th Century visionary, three times premier of Queensland, and a giant who did more than anyone else at the time to develop this state.

Our institute hosts an annual lecture to celebrate a person with the qualities that McIlwraith represents.

He did indeed try to annexe Eastern Papua New Guinea, not to facilitate any “slave trade”, but to forestall foreign power from doing the same and endangering our security and trade routes.

This was a visionary and statesmanlike initiative for the defence of Australia, which forced the hands of the British, who made PNG a protectorate, financed by the Australian colonies.

Strategically this was crucial in both world wars.

With the Chinese government currently trying to secure a naval base in PNG, it reminds us McIlwraith showed the sort of strategic awareness and daring that our current governments, state and federal, seem to lack.

He deserves more recognition, not less. To see the future, you need to understand the past.