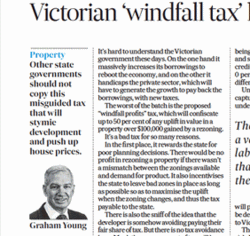 It’s hard to understand the Victorian government these days. On the one hand it massively increases its borrowings to reboot the economy, and on the other it handicaps the private sector, which will have to generate the growth to pay back the borrowings, with new taxes.

The worst of the batch is the proposed “windfall profits” tax, which will confiscate up to 50 per cent of any uplift in value in a property over $100,000 gained by a rezoning.

It’s a bad tax for so many reasons.

Ironically, to combat housing affordability, the Victorian government has a number of schemes to lower costs for developers. Rhett Wyman

In the first place, it rewards the state for poor planning decisions. There would be no profit in rezoning a property if there wasn’t a mismatch between the zonings available and demand for product. It also incentivises the state to leave bad zones in place as long as possible so as to maximise the uplift when the zoning changes, and thus the tax payable to the state.

There is also the sniff of the idea that the developer is somehow avoiding paying their fair share of tax. But there is no tax avoidance here. Much the same amount of tax will be paid overall. What changes is when, and to whom, and the risk profile of a development.

If no betterment levy is charged, the developer potentially makes a higher profit. This will be taxed at the end of the process by the Commonwealth when the development has been de-risked and is being sold.

This will be first as company tax and secondly as personal tax. After franking credits this will be on a sliding scale between 0 per cent and 47.5 per cent, so not a lot of difference in the tax rate.

Under the proposed system the state will capture the tax income instead, although ironically, under the Grants Commission process, this will probably be a short-run gain which will be deducted from future GST distributions to Victoria and handed to other states.

The proposal also increases development risk. Not every rezoning application is completely successful, or successful at all. The profit from the successful applications has to underwrite the losses from the unsuccessful ones. To economically justify paying tax on successful rezonings, the developer will be forced to increase their win/loss ratio, leaving deserving, but more marginal, proposals, untouched.

It’s unclear from public statements, but it would seem likely that someone who had invested in land that has been rezoned would also have to pay the levy. In this case it would appear that they have not earned the profit, but this would be wrong.

It is frequently foreseeable that some areas will eventually be rezoned as urban densities increase. Land and houses near transport and retail hubs are likely to be rezoned for higher-density dwellings, as is rural land on the edge of towns. This potential uplift will figure in all purchasing decisions in these areas and be part of the contract value.

Because the tax raises costs and stifles development, it will suppress supply, forcing prices up. It will also force a developer to charge a higher price for the end product. Development feasibilities do not count company tax or personal tax as a cost, but they do count taxes levied on the way through, such as land tax, stamp-duty and GST.

A developer who rezones a property and increases its value effectively buys more cheaply, making it easier for them to bring affordable product on stream. In fact, they will probably end up sharing some of their good fortune with the purchasers. Increasing tax on the way through means they are going to load all of that onto the end product, or they won’t do the project at all.

The whole fandangle is a version of Marx’s labour theory of value that imputes no value to the work of the entrepreneur, and delegitimises entrepreneurial effort on the basis it is achieved by exploiting someone else and is “unearned”. To ethically justify the tax you have to see the uplift in value due to a change in zone as a gift of the state. In fact, it is a gift of the entrepreneur, who has found a way to grow wealth by correcting an inefficiency in the town plan.

Other states may be encouraged to follow suit. They should think twice. A tax that kicks entrepreneurs and home buyers, costs more than it raises, and only temporarily shuffles tax revenues between the state and Commonwealth, is not a recipe for “building back better” after COVID-19 .