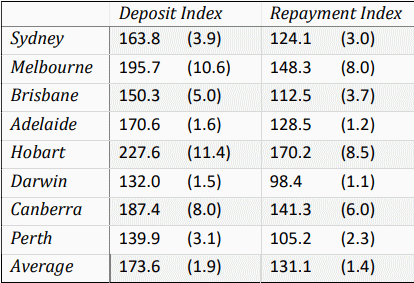 The latest Australian Institute of Progress Housing Affordability Index shows that despite average price rises in the March Quarter of 2021, housing repayments in most capital cities are relatively affordable, with Darwin, Perth and Brisbane the most affordable and Hobart, Melbourne and Canberra the least.

The decrease in affordability in the March Quarter was 1.4 points for repayments to 131.1 and for house deposits it was 1.9 to 173.6. (100 is the baseline and represents the average of prices during the 10 years from December quarter 1994. A higher figure means affordability has decreased, and a lower figure that it has increased.)

While house repayments are somewhat expensive compared to the 90s, the difficulty of saving a deposit for a first home buyer has never been greater.

If current trends continue, then this will get worse, but the question is how much worse can it get?

Repayment affordability in cities like Brisbane, Perth and Darwin are in a band from slightly better than the average index level for the 90s, the time when housing was the most affordable in the last 30 years, to at most 12.5% worse.

This has been aided by record low interest rates.

However Hobart is well-over historical figures, with repayment affordability 70% worse than the 90s, Melbourne is 48.3% and Canberra 41.3% worse.

While these peaks don’t hold for long, they imply that we could be looking at significant increases in discomfort for home-buyers in Perth, Darwin and Brisbane where repayment affordability was 96%, 79% and 56% worse respectively in 2008 than now.

Repayments are only half of the equation.

The other half is the time taken to save a deposit. Assuming an average house and average wage this now takes on average 73.6% longer than the 90s, with Hobart 127.6%, and Melbourne 95.7% and Canberra 87.4% longer.

Low interest rates are a double-edged sword, allowing Australians to afford historically high-priced real estate, but only after penalising them by the historically high deposit required. It appears likely this will get worse for a while.