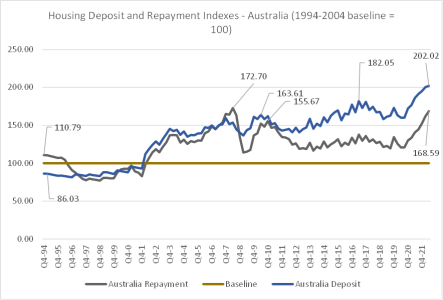 Analysis by the Australian Institute for Progress using their Housing Affordability Index projects that house prices are likely at a peak, with or without interest rate rises, as they nudge levels of unaffordability last seen just before the Global Financial Crisis.

Executive Director Graham Young said that they had projected forwards to the June quarter 2022 using price forecasts by CoreLogic.

“The predicted price rises have the same effect on affordability as a possible 1% rate rise would have if prices didn’t rise. Our model suggests this would be self-correcting as new buyers withdraw from the market, removing some of the fuel allowing existing owners to trade-up.

“Money markets have started to anticipate interest rate rises, independent of Reserve Bank action. If price rises materialise at the same time as interest rates increase by say 1%, then average affordability will be as low as it has been at any time in the last 28 years.

“A combined increase in prices and interest rates would push Melbourne, Sydney, Canberra and Hobart well-above previous peaks; Brisbane and Adelaide would be moderately unaffordable; and Perth and Darwin slightly so.

Mr Young said that in the past affordability has been cured by interest rate declines, but rates are predicted to increase, rather than fall.

“Before the GFC borrowing rates peaked at around 9.5%, and then drop to 5.8%, greatly increasing affordability. With borrowing rates somewhere around 4.5% at the moment (standard variable rate), rate falls are unlikely.

“This means wages have to rise, or house prices fall, for affordability to be restored.

“Prices have the capacity to fall faster than wages increase, so it is more likely that house prices will fall as new home buyers cannot afford to buy into the market and withdraw.”

Mr Young said that longer term a burst of inflation may lower house prices in nominal terms, shifting the burden of adjustment from home buyers to depositors. This would perversely affect first home buyer’s ability to save a deposit as inflation erodes the value of cash.

“Some state housing markets are still reasonably priced from a repayment point of view, so with borders opening post-COVID it is possible that prices have further to run in Perth, Darwin, Brisbane and Adelaide. The market looks to be hitting a ceiling in Sydney and Melbourne.

“Annual inflation is running at 6.2% in the USA, but only 3% in Australia. This perversely increases the risk from interest rate increases because the market for savings is international, but inflation is domestic, so wages will probably not track higher interest rates, but lower domestic inflation, making repayments less affordable in the future.

“It seems from our research that the seamless rise in real dwelling prices that has seen an increase of 575% since 1994 and created an easy path to wealth for a generation appears to be over.”’