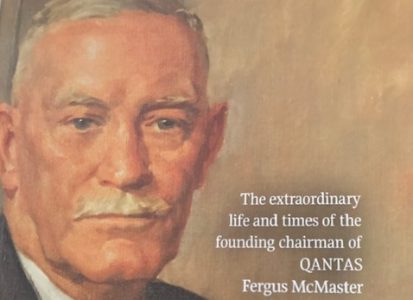 When Chairmen Were Patriots tells of the extraordinary life and times of Fergus McMaster, entrepreneur, patriot and philanthropist. He was founding chairman of QANTAS – from its humble beginnings with two flimsy aircraft right up until, as the nation’s overseas airline, it was nationalised by the Chifley government in 1947; and he was by anyone’s measure a great patriot. For the whole 24 years of his chairmanship he took little in the way of salary or allowances, believing this work to be a service to the nation.

This seems extraordinary to us today. Our world couldn’t be more different. Companies think globally rather than nationally, and the salaries and allowances given to top executives and chairmen are eye-watering.

But it was an exciting time to be alive. Elizabeth Fysh tells the story as a fast-paced narrative, recounting the often funny – as well as the sad – incidents which accompanied the birth and infancy of our national airline.

It is also a part of our history of which we can be justly proud. As modern Australians, we need to be reminded of the proud achievements of our past.

When Chairmen Were Patriots will be launched by Elizabeth Fysh, who apart from being the author is also a member of the Australian Institute for Progress.

Entry includes finger food and drink and there is plenty of off-street parking at our offices in Woolloongabba.

House prices to fall as Australia hits the bottom on housing affordability. Our latest research ... https://aip.asn.au/2021/11/record-unaffordability-looms-and-points-to-downturn-even-without-rate-rises/

Women twice as likely to fear COVID as men. Could this have affected our pandemic response? More women in positions of power than in previous pandemics. ... Just thinking aloud. Reasoned contributions welcome. https://vtx.vt.edu/articles/2021/11/science-covid_fear_gender_differences.html

Peter Ridd is a physicist and expert on the Great Barrier Reef who was sacked by James Cook University for questioning the professionalism of some of the work produced by other academics at the university. Reef Heresy explores some of those issues, laying out the scientific facts.