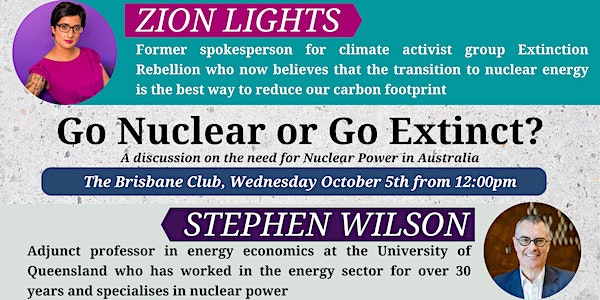 Zion Lights’ embrace of nuclear power doesn’t mean she has given-up being an environmentalist. She’s just come to understand that in order to decarbonise the world nuclear is the only environmentally sound solution. Professor Stephen Wilson has come to the same conclusion by a different path. He’s written a book on how Australia could have nuclear power by the 2030s.

This event will weave the personal together with facts and practicalities. It’s an event for people who understand this area deeply, as well as people with less intimate knowledge but who want to be good citizens and reduce their carbon footprints.

Whether Australia has nuclear power is not just a question of physics, but of emotion and public perceptions.

Zion is a writer and broadcaster who is an eloquent and forceful advocate. She was the spokesperson for Extinction Rebellion UK, and is on a lightning visit to Australia. Zion’s a second generation Briton, and mother of two young children, and lives in Devon.

Stephen is an energy economist with 30 years worth of assignments in over 30 countries. He’s an adjunct professor at the University of Queensland where he supervises PhD students and collaborates on other projects like the study “What would be required for nuclear energy plants to be operating in Australia from the 2030s“.

Find out why it’s alright to be in favour of nuclear and what nuclear brings to the table.

The Brisbane Club is  very close to Central Station and the Queen Street Mall Bus Station.