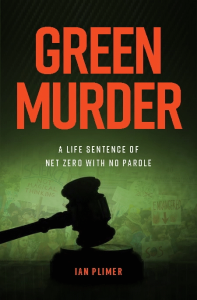 They murder free speech and freedoms and their takeover of the education system has ended up in the murdering of the intellectual and economic future of young people. They terrify children into mental illness with their apocalyptic death cult lies and exaggerations. They try to divide a nation. They are hypocrites and such angry ignorant people should never touch other people’s money.

The greens are guilty of murder. The sentence is life with no parole in a cave in the bush enjoying the benefits of Net Zero.