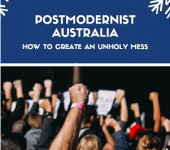 Giles Auty has been described as “one of only four outstanding art critics in Britain in the past forty years” – Paul Johnson, The Spectator, February 17, 1996. He’ll be launching his latest book Postmodernist Australia – How to create an unholy mess in conversation with Graham Young. Auty argues that postmodernism is a Marxist movement which appeared after the loss by communism of the Cold War. The launch will be accompanied by refreshments and book signings.