AIP Home > Events > Fergus McMaster, Patriotism, Pioneer, Qantas > Premier of “A Coral Bleaching Tragedy” and “The Measure of the GBR” 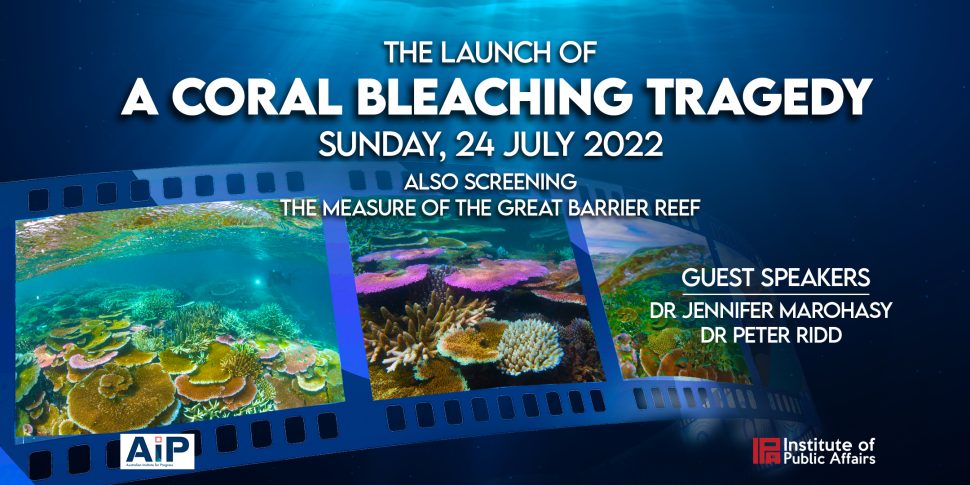 The Australian Institute for Progress and the Institute for Public Affairs is hosting a world first premiere of “A Coral Bleaching Tragedy” as well as its prequel “The Measure of the Great Barrier Reef” to be followed by a Q & A with the films’ director and narrator Jennifer Marohasy, and scientific consultant Peter Ridd.

The Great Barrier Reef has experienced a lot of threats over its 600,000 years of off-and-on inhabitation of the East Coast of Australia, perhaps none more egregious than the threat by UNESCO to list it as endangered.

These movies show the true state of the reef now, while providing some historical perspective. Has the GBR been damaged by bleaching? Absolutely. How badly, and is this outside normal parameters?

Federal and state governments have spent billions “saving” the reef, while reef scientists like Professor Terry Hughes claim that while the reef might not really be in danger, an endagered listing would be a good way of putting pressure on the federal government to do more about climate change.

Ironies, misinformation and naked ambition all coalesce around this iconic natural adornment of Queensland, and this is a good chance to explore them and what the real state of the reef is with people who really know and care.

This is an event you won’t want to miss! Seeing is believing.

Free speech is the gold standard, which we’ve maintained in the Western World for at least the last 50 years. Cancel culture is the new puritanism, enforcing conformity by expelling dissidents not just from the public sphere but even destroying businesses, terminating employment and severing social ties. Join Tony Abbott as we fight back for the return to sanity.