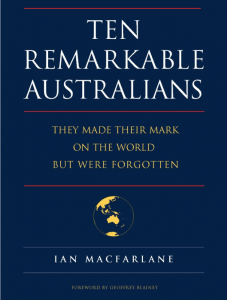 Are we too quick as a nation to forget those who shaped us? Former Reserve Bank Governor Ian MacFarlane has written a collection of short biographies of ten remarkable Australians who were well-known at one stage in the 20th Century, but have since been forgotten. He draws lessons for the present from their lives, as well as providing greater understanding of who we are as a nation.

The book will be launched by Brisbane journalist Des Houghton.

It’s rare for a book to appeal across the spectrum, but look at who’s read it and liked it:

“An outstanding achievement: the forgotten heroes of Australia’s great era of adventure and creativity brought to life.” – Lindsay Tanner

“Ian Macfarlane has brought to life ten remarkably different, highly influential, and above all else, talented Australians. Most importantly, the book is so easy to read…because each character is so refreshingly different.” – John Howard

“This is a journey into Australia’s forgotten past, a series of compelling portraits of astonishing figures whose lives deserve to be recalled and celebrated.” – Paul Kelly