Sonia Kruger was the first significant celebrity (unless you put Pauline Hanson in this category) to suggest that perhaps we should stop Islamic immigration, at least temporarily, until the terrorism issue is settled.

Now an Essential Poll says 49% of Australians agree. The proportions between the parties are 60% amongst coalition voters, 40% amongst Labor voters, and what the Australian calls a “surprising” 34% amongst Greens voters.

So Sonia was being everywoman, and was excoriated for it by many of her peers, with only a handful standing-up for her right to hold that opinion.

I wondered if she would survive, and thought she was actually pretty brave to put such a point of view.

It seems now that Sonia was more in tune with the nation than all the highly paid commentators interpreting the world to us.

No one should have been surprised at this poll result. In landmark research in this area our think tank, the Australian Institute for Progress, found large proportions of the population who said Islamic immigration was a bad thing. Here is the relevant table: 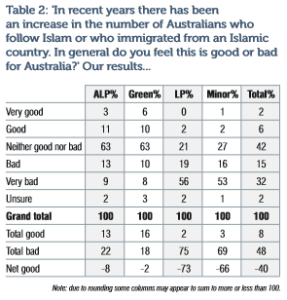 The only surprise in the Essential poll really is that the ALP and Greens voters are now more concerned than they were, but concern was always there.

No doubt this poll will be met by condemnation of Australia  and we will be told that not all Muslims are terrorists.

But none of this 49% thinks they are. They just think that if even if a couple of percent of them might become radicalised, it is not a smart idea to be allowing any of them into the country.

We apply the same types of policies to our borders when it comes to quarantine, so it oughtn’t to be too difficult an idea for the mass of self-selecting public intellectuals to get their head around.

If people are looking for other reasons why so many are concerned about Islamic immigration then they might read our report.

We look at motivations and find a variety, including the idea that Islam is at war with the west, its treatment of gays and women (particularly motivating for Greens voters), failure to assimilate in Australia, their religion, and the culture in  some Islamic countries (as distinct from Islam itself).

Australia has been sleep walking into a crisis with too many putting their fingers in their ears and saying “lalala” while refusing to listen to many of their countrymen and women, or give them any credence for having a defensible point of view.