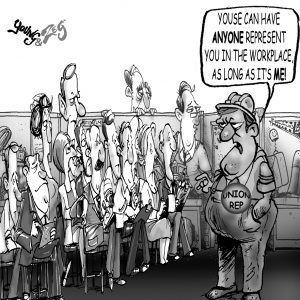 The percentage of Australians belonging to trade unions has been in steep decline with a drop from 40 per cent to about 15 per cent of the workforce in a little over two decades. Some of this is due to a change in the composition of employment, but most of it is due to the regulation that creates the statutory monopolies that deny workers choice of who will represent them at work.

This means that these union monopolies are able to charge at least twice as much as is needed to provide the service to members. Evidence uncovered through the Trade Union Royal Commission, findings of the Fair Work Commission in the Coles case, and the 7/11 scandal prove collusion between trade unions and employers, with unions not only failing to do their job to ensure that companies adhere to industrial relations law but actively colluding with them to breach these laws. So employees have been underpaid with the connivance of their monopoly unions in return for the employers enriching these unions by making union membership compulsory in their firms.

Employees ought to be able to appoint anyone, or any organisation, to represent them in negotiations with their employers. The state government should remove all regulation which grants exclusive or monopoly rights to any employee representation body and reclaim its industrial relations powers from the Commonwealth to allow these freedoms to be extended to the private sector as well. It should also enact legislation to mirror the ABCC at a state level, and ensure that only those construction firms which are compliant with the laws and building code of the government, may tender for government work.